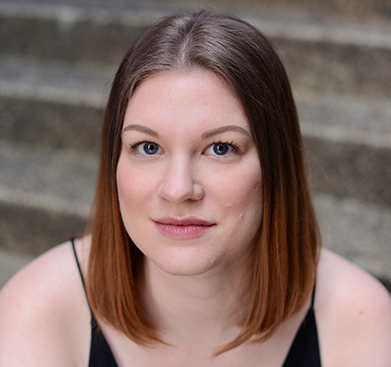 Naptown Sings and Plays! is excited to welcome Miss Hannah Noyes to our studio. Hannah received her Bachelor of Music, magna cum laude, from Concordia College in Moorhead, MN, and her Masters in Vocal Performance at Johns Hopkins University-Peabody Institute under the guidance of Ah Young Hong. At the Peabody Institute, Hannah received the George Castelle Memorial Award and was inducted into Pi Kappa Lambda Music Honor Society.
What makes Miss Hannah special? Not only is she a pro in her instruments, voice and piano, but she understands how to relate to her students, and how to make teaching relatable to all. Her bubbly personality will keep a smile on your face from the lesson’s beginning to its end.

A versatile soprano performing opera, art song, and new music, this season Hannah Alexandra Noyes will sing in a virtual collaboration with composer Jacob Wilkinson, premiering a song cycle and cantata at the end of 2020. In 2019, she debuted as Mozart’s Donna Anna in the Estates Theatre in Prague, Czech Republic. Last season, she performed Tatiana from Eugene Onegin and Lisette from La rondine with Peabody Opera Theatre.

An advocate for contemporary classical music, Hannah starred as Émilie in Peabody’s Now Hear This presentation of Kaija Saariaho’s Émilie. Hannah has been a vocalist in numerous world premieres and recently created the role of the Younger Brother in A Madman’s Diary by Jun An Chew in April 2019. She was part of Peabody Conservatory’s Opera Etudes program where she performed in previews for new vocal works, including a monodrama for soprano during the fall of 2018. She was also part of the premier of René Clausen’s Passion of Jesus Christ conducted by the composer at Orchestra Hall in Minneapolis, MN in April 2017.

Between 2018-2019, Hannah made her Peabody Opera Theatre debut last season in Puccini’s Suor Angelica and Gianni Schicchi and in Bernstein’s MASS under the direction of Marin Alsop. During the 2017-2018 season, Hannah appeared in the inaugural season of the Concordia Opera as Rosalinda in Die Fledermaus, where she also performed in scenes from Falstaff (Alice Ford) and Candide (Cunegonde). That summer, Hannah attended SongFest in Los Angeles as a Colburn Fellow where she was featured in a recital performing Arnold Schoenberg’s Brettl-lieder.

She has also been seen on stage in Italy at the Brancaleoni International Music Festival in scenes as Violetta in La Traviata and Susanna in Le nozze di Figaro and at the Torre dei Calzolari in Gubbio as Contessa Almaviva in Figaro. At W. Stephen Smith’s Naked Voice Institute, Hannah portrayed the partial role of Zdenka from Strauss’s Arabella. In concert, Hannah was the guest soprano soloist in Schubert’s Mass in G with the Staples-Motley High School Orchestra in Staples, MN.