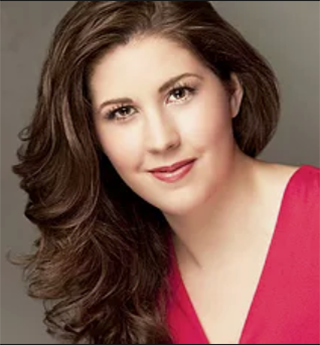 Ashley Alden made her New York City role debut as Barbarina in dell’Arte Opera Ensemble’s Le nozze di Figaro as part of their critically acclaimed Beaumarchais Trilogy. Ms. Alden completed her training with a Professional Studies certificate at the prestigious Manhattan School of Music under the supervision of Marlena Malas. While at Manhattan she worked closely with Artistic Director Dona D. Vaughn through her Opera Studio and as Julie in their performance of Susa’s Dangerous Liaisons. Ms. Alden received both her Master’s and Bachelor’s from The Catholic University of America where she was honored with the Benjamin T. Rome School of Music Performance Award in recognition of her work as Susanna (Le nozze di Figaro), Rosalinde (Die Fledermaus) and Musetta (La bohème) to name a few.

While in Washington D.C., she performed with Bel Cantanti Opera as Nella (Gianni Schicchi), Adina (Elixir of Love) and Der Königin der Nacht (Die Zauberflöte). In 2017, Ms. Alden worked closely with famed Metropolitan Opera coach Joan Dornemann in her International Vocal Arts Institute held in New York City. In addition to her opera performance, Ms. Alden has performed great vocal works such as Schubert’s Mass in G, Bach’s Coffee Cantata, and Villa-Lobos’ Bachianas Brasilieras. As a core member of The Mendelssohn Club of Philadelphia she debuted the 2014 Pulitzer Prize winning Anthracite Fields by Julia Wolf. Recent performances include Mozart’s Laudate Dominum from Vesperae Solemnness di Domenica K321 with Maestro Giovanni Reggioli and the Wintergreen Festival Orchestra. Ms. Alden is a frequent collaborator with acclaimed pianist Joy Schreier with whom she is available for recitals. This summer, she follows her interest in the Alexander Technique by studying at the New York City’s Balance Arts Center ATsinging Intensive where she’ll work on the intersection of the technique with classical singing.

As an instructor, Ms. Alden works with all types of musicians, from newbies to college bound pre-professional singers. She builds on the foundations of alignment, breath, and clear mind to produce a healthy and efficient sound. In addition to building technique, Ms. Alden teaches music theory, acting, stage deportment, language, and musicianship. She hopes to inspire critical thinking within her students that moves beyond the studio and into everyday life. Ms. Alden’s teaching style brings a mix of professionalism and humor that students find disarming, allowing them to get their best work out of each lesson. Starting this year at Naptown Sings, Ms. Alden’s studio will meet once monthly as a group to further integrate technique and musicianship while maintaining the fun community Ms. Alden’s students are known to enjoy.

Here’s what people are saying!

“Ashley Alden has been teaching voice lessons to my students at Archbishop Spalding High School since September, 2018. I have seen much improvement in these students as vocalists, musicians and performers. I was so impressed with their progress that I asked Ashley to take me on as a student. I was suffering from severe tension in my neck and shoulders which was causing me to have problems speaking and especially singing. I am happy to say that she has worked wonders with me in a very short period of time. Her knowledge of The Alexander Technique and her attention to detail during the lessons has helped me grow as a singer and a teacher. I highly recommend Ashley to anyone wishing to improve their singing/musicianship and can honestly say that these lessons have been a true blessing to me, both physically and musically.

“I can say, with strongest confidence that Ashley is an amazing instructor.

Ashley has taught my daughter, Blanca, for three years. Originally, we had searched for a singing teacher, because of Blanca’s interest in musical theater. Blanca has a natural acting ability, but was less adept at singing. However, in the time that she has been working with Ashley, Blanca’s skills and confidence as a singer have greatly increased and this has had a positive effect on her auditions and performances. Ashley has been a patient teacher, who has tailored her instruction in accordance with Blanca’s needs. Ashley has also been very flexible with her teaching schedule in order to accommodate Blanca’s many rehearsals and extra curricular activities.

I highly recommend Ashley as a singing instructor. She has done an incredible job for my daughter.”

“Miss Ashley has been teaching my 10 year-old daughter for 2 years. She is committed to bringing out the best in Stella and working on her strengths and identifying her weaknesses. Stella has improved dramatically and loves her singing class. Miss Ashley is passionate about her career which you can truly see being passed on to the students. She is professional, caring, and fun and creates a positive environment and experience for each class.”

“Hi, I’m Regan, and I have been Mrs. Ashley’s student for over 3 years now! I can’t even imagine where I’d be today without her guidance. Mrs. Ashley is an outstanding voice teacher. My voice technique as well as my confidence has grown tremendously under her teaching, and I have fostered a great sense of community with Mrs. Ashley and her studio. She has helped me sharpen my singing skills while still maintaining a healthy, sustained voice. I am so so grateful for Mrs Ashley and could not recommend her teaching enough.”